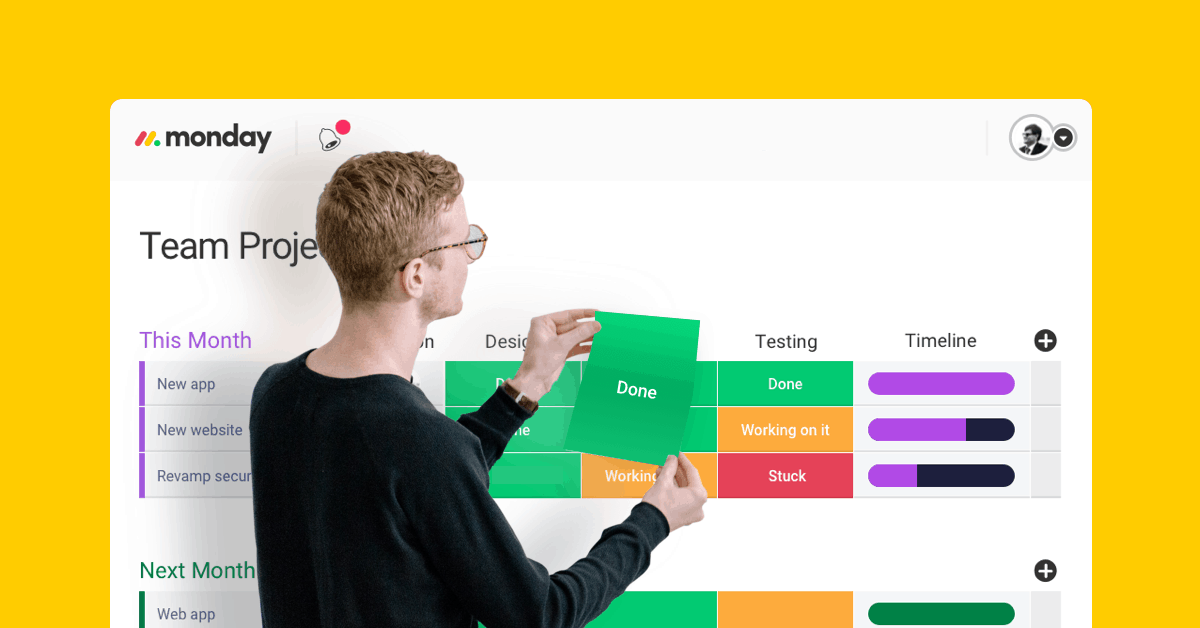 Project Management Company – Monday.com announced on Tuesday it raised $150 million in a Series D investment led by Sapphire Ventures. The round more than tripled Monday.com’s valuation from $550 million to $1.9 billion in just one year, according to a source with knowledge of the transaction — making Monday the highest-valued startup in its category of work software and the most valuable startup based in Israel.

“The world is digitizing, and people are looking for better ways to do what they do,” says cofounder Roy Mann. “It’s a huge opportunity.”

Founded by Mann and Eran Zinman as dapulse in 2014, Monday has emerged as one of the leaders in work software that helps teams track projects and assign tasks to individuals and groups, a category known as project management. 80,000 paying businesses use Monday today, up from 35,000 a year ago, and including businesses like Philips, WeWork and Wix.com. More than half of monthly users engage with Monday’s software daily, according to Zinman, and Monday.com says it will close this year with more than 150 integrations with other work tools.

“We want to connect everything to Monday,” says Zinman. He credits Monday’s integrations and a column store that makes it easy to import data and visualizations as two of the reasons the company claims to have cut churn and grown fast in recent months. “It makes us a true platform to build any tool you want.”

At Sapphire Ventures, managing director Nino Marakovic said that after tracking Monday for several years, its emerging market leadership meant the firm “could no longer resist.” To Sapphire Ventures, Monday solves for the large percentage of office work that isn’t easily standardized and covered by existing software (Sapphire Ventures’ largest limited partner is SAP). “It’s a little bit of a race to be the center of gravity where you spend most of your time,” he says.

To back Monday, however, came at a much higher price tag than it did just a year ago for the startup’s previous investors. Monday’s valuation of $1.9 billion came as the company grew its annualized revenue from $18 million to $50 million in 2018, and to an anticipated $120 million this year, all while more than doubling its customer base. “From a revenue and growth perspective, it’s quite a unique asset,” Marakovic says.

Monday is now the highest-valued private tech company based in Israel, ahead of hardware maker Infinidat, according to a CB Insights list. While other Israeli-founded or cofounded businesses have higher valuations, including Compass, Houzz, Lemonade, Tanium and WeWork, those businesses are based in the U.S. Within Israel, Monday moves ahead of hardware maker Infinidat, valued at $1.6 billion, and ad-tech company ironSource, which boasts far higher revenue.

Within the productivity market of project management and business software, Monday’s now one of the highest-valued companies for any geography. Its $1.9 billion valuation vaults it ahead of the $1.5 billion reached by productivity rival Asana in November, and ahead of other popular workplace startups such as Airtable (valued just over $1 billion) and Notion (valued at $800 million).

With the funds, Monday plans to deepen its hooks into users’ workdays through more integrations — its founders want to have 1,000 by end of next year — while continuing to add features like compliance tools for enterprise users to subscribe for thousands of seats. The company, which employs 265 people, all but 50 of them in Tel Aviv and the rest in New York, recently launched its first non-English languages of Portuguese, Spanish, German and French. It plans to ramp up its sales organization with the funding to score more million-dollar-plus type deals, including hiring in the U.S. “We have a lot to prove there,” Zinman admits.

And Monday plans to return to the market with more cheeky — or annoying — advertising, based on whom you ask. A 30-second video and offline ad campaign targeting New York City subways and stations and billboards in the Bay Area won marketing industry praise. A search on Twitter, however, turns up plenty of less enthusiastic replies. “I’ve been haunted by Monday.com YouTube pre-roll ads for the past 18 months,” one Twitter user complained in June. “Only two things are certain in life: death and Monday.com ads,” another tweeted in July. (“We saw a major uplift on our website and in awareness,” Zinman says.)

Monday.com’s founders assert that the funding could be the last round the company raises before a possible IPO, though Mann says it has no specific plans yet to go public. Asked about the milestone of becoming Israel’s most valuable local startup, both founders act unmoved.